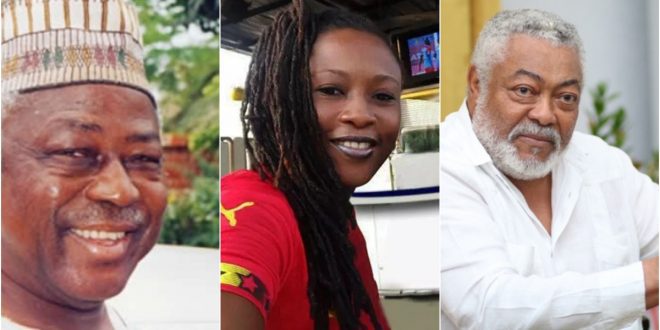 The daughter of the late President Hilla Limann, Dr. Zilla Limann has cried out on how Ghanaians have easily forgotten his father.

in history, Dr. Hilla Limann was President from 24th September 1979 and was overthrown in 1981 when former President Jerry John Rawlings staged a coup d’état.

according to Dr. Zilla, his father is not acknowledged in the history books of Ghana’s heroes just because he was overthrown by a coup d’état.

according to the daughter of Hilla Limann, she knows her father has a great vision for Ghana even though she was young at that time.

”…for what he stood for, he said his ideology is Ghana. So, for him, anything Ghana; it didn’t matter what it was. It was Ghana and that is how he thought and that is what was his vision…And he actually did quite a bit in his time [you know]. So, he took over at a very turbulent time when the economy was really bad. And, in his time…in the 2 years that he was there, he did quite a bit and he was able to start turning around the economy.”

”I think he’s very much under-appreciated and that’s also because the knowledge is so limited. They don’t seem to know much about my dad and what he did. Even me, I think I don’t even know enough because I wasn’t old enough…But knowing what I know now, he was very under-appreciated but then I found out later on that, after the coup happened, it appears there was a deliberate attempt to wipe off everything he did…So even looking for stuff on him is very hard. It’s very, very hard finding things about my dad. I guess because it was a coup. They sort of wiped out a lot of things.