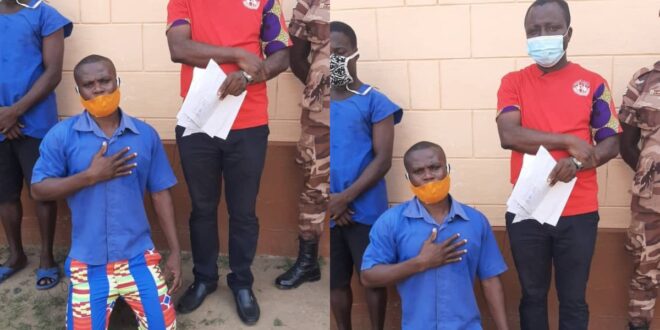 In another episode of the poor justice system brought to the fore by Crime Search TV Gh, a young Ghanaian man was sentenced to 12 months in jail over a 5 pesewas coin in a sad story.

The tale revolves around one Kwabena Boateng who was sentenced to 12 months in prison for injuring his best friend who used an old currency of 5 pesewas, which is not used anymore to purchase from his business.

Boateng revealed that his best friend used an old currency to buy cigarettes from his 10-year-old daughter while he was not around. He claims he confronted his friend about it when he got upset of it.

below is his story;

“Kwabena Boateng has been given a 12-month prison sentence for causing harm to his best friend who used an old 5 pesewas currency, not in use to buy from his shop.

Boateng explains further that his best friend used the outdated currency to buy cigarettes from his ten-year-old daughter whiles he was away. He says when he got wind of it, he confronted his friend about it.

ALSO READ  Man disrespect his wife sends her nud3 pictures to his side chick; see his reason

Not happy with Boateng’s approach, the friend pulled a knife. In the ensuing confrontation, the knife slightly cut his friend’s hand.

Boateng was eventually arraigned before court and asked to pay a two thousand cedis fine or in default go to prison for a year. He could not pay so had to endure the psychological stress and the pain of imprisonment.

Not good to take the law into ones’ hands, but at times certain circumstances may push one to make “war” to live in peace. The state could have at least provided a lawyer for Boateng as it is done in other democratic jurisdictions, but poor people hardly get lawyers to defend them in court.

The Legal Aid scheme constitutionally mandated to help the poor and the vulnerable, do not have enough lawyers. Boateng still feels justice was not served in his case as he tearfully narrated the injustice meted out to him.

ALSO READ  Level 400 student k!lls himself after his girl left him to spend valentine with another man (photos)

Fortunately, good samaritan Ali Ibrahim has paid his fine for him to go home. But for how long will good people continue to pay fines when Parliament could have simply passed the Non-Custodial Sentencing Bill into law? Many thanks, Mr. Ali. May Allah richly bless you.”