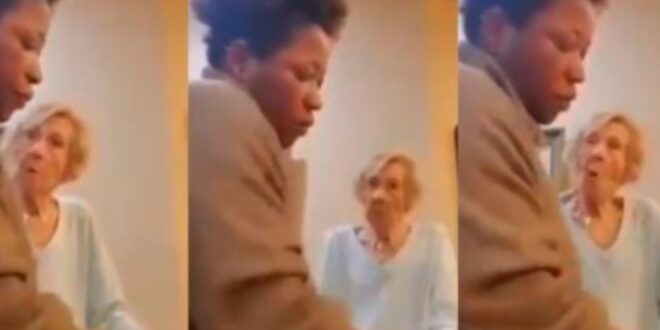 Recall the viral video that captured an old white lady spitting on a Ghanaian lady who is her caretaker abroad (probably in America) causing massive reactions on social media from Africans?

The old woman is seen in the video that emerged online, telling the domestic worker to leave her home, branding her a cheat, and threatening to contact the police if she uses her car again, and spitting on her face.

The black woman is apparently a Ghanaian and, in a recent interview, she gave her side of the story of what actually happened. The old lady is suffering from dementia, according to her, and has been bullying her as a result of that.

She told the interviewer that because the woman was instead calling the cops on her, she filmed the video to act as evidence. Ultimately, while disclosing that the videos were leaked by bad people after her phone was stolen, the lady said the old woman meant no harm because of her disability (dementia).

She also clarified that for five years she has been working for the old woman’s family, but did those videos to keep as proof because the white woman often calls on her by police for supposedly attacking her.

Dementia is a common term for memory loss, vocabulary, problem-solving, and other cognitive qualities that are too extreme to interfere with everyday life. The most prominent cause of dementia is Alzheimer’s.