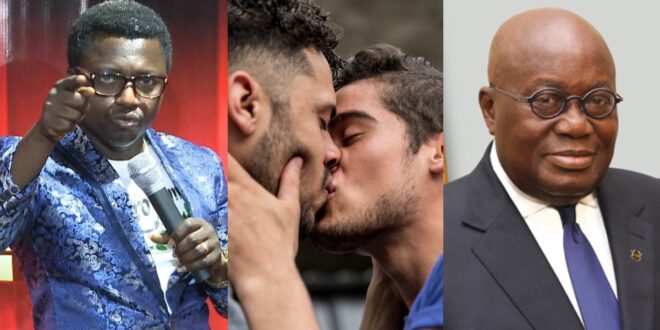 “Ghana should Accept LGBTQ In Ghana under these conditions…” Opambour tells Nana Addo.

The topic of LGBT rights in the country has caused a lot of conversation, with some actors and politicians expressing their support for the culture.

Some supporters of the community claim that these individuals have rights as well, and that they should be able to exercise them openly.

Bridget Otoo, Sister Derby, Wanluv the Kubolor, and others have lent their support to the community’s efforts to persuade the government to legalize it.

Having said that, Prophet Ebenezer Boakye Yiadom, also known as Prophet 1, the founder and chief of Ebenezer Miracle Worship Centre, has finally added his voice to the debate in town.

According to him, he is pleading with the government to encourage people to do what they wish as long as they are given a month to impregnate their lovers (both gays and lesbians) and a life sentence if they are unable to do so.

During his church service, he found this discovery while pondering why people engage in such actions.

“Nana Addo, Mr President, I’m pleading with you, let us pass laws concerning the LGBTQ+ community in Ghana because we didn’t have it in the country,” he said.

“Let the legislature pass legislation. Whoever is found doing anything ungodly will be given one month to impregnate his or her wife, and if that is practicable, the government will give you a free house so you can resume your activities and have more children, but if you are unable to impregnate your partner, you will be jailed for life.”