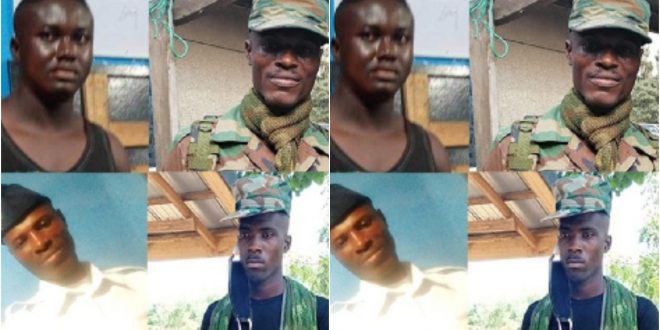 The Ghana Armed Forces have arrested four imposters who were disguised as they were Military personnel. Two of them were arrested at Katamanso, in the Kpone-Katamanso Municipality on Tuesday, May 5, 2020 while the remaining two at different locations.

According to the commander of Ghana Armed Forces, their Military personnel were sent on a patrol at Katamanso but upon reaching, they exceeded their number, this triggered investigation to find the one that has been in their miss.

The first suspect was arrested there at Kpone-Katamanso and he claimed to be a Rating at the Naval Base, Tema. he identified himself as AB1 Arhen Ebenezer. he was sent to the Eastern Naval Command for identification which proved false.

Upon further interrogation, he pointed out another person Mustapha Mauris who was also an imposter.

On Tuesday May 12, a 32- year old man, Stephen Zubbuy Matsi, was arrested in Pokuasi posing as a soldier.

Oscar Eshun, another imposter was also arrested by the Naval intelligence operations of the Western Naval Command at Inchaban in Sekondi-Takoradi for posing as a military officer. All four imposters await for Court to be prosecuted.

The Ghana Armed Forces made this known in a statement signed by Squadron Leader R. Omanye-Agyei for Director of GAF PR Directorate.