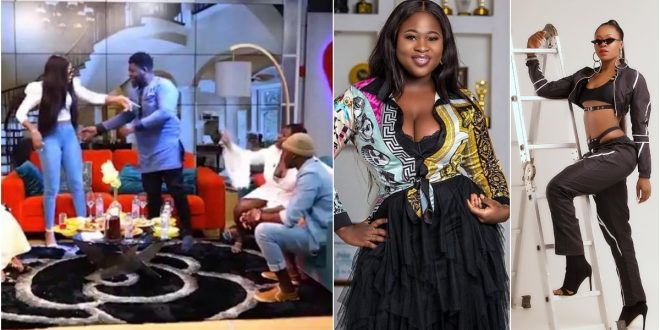 The beef between the two female Artists, Sister Afia and Freda Rhymz is gradually reaching its peak as days keep on passing. This time, both lost it on a live TV show when issues about their beef were raised.

The two( Sister Afia and Freda Rhymz ) have recently been throwing verbal pounces at each other following the beef between them. they recently turn their beef from lyrical to physical, when they met at TV3 premises.

They were called yesterday to settle their differences on a live TV show hosted by Nana Ama Mcbrown, United Showbiz. things turned from bad to worst on the TV show when their beef was raised.

At the beginning of the show, Freda Rhymz was questioned on why she decided to beef Sister Afia since sister Afia’s ‘WMT’ track had nothing concerning her. in answering, Freda said she got pissed when sister Afia dropped a rap beef song only for her to go on IG live to cry to her fans. she added that she also wanted to entertain her fans as well.

Sista Afia in retaliation said this whole beef was between her and Eno Barony but Freda forced herself into the trend, so the right thing she should have done was to pay her (Afia) some money so that they can make the beef interesting.

Suddenly, a heated argument started between the two when sister Afia apologized to Freda Rhymz for attacking her at the TV3 premises and later said she was going to attack her again. This made Freda Rhymz attempt leaving the studios of UTV if not for the intervention of Bulldog who was also a panelist on the show.