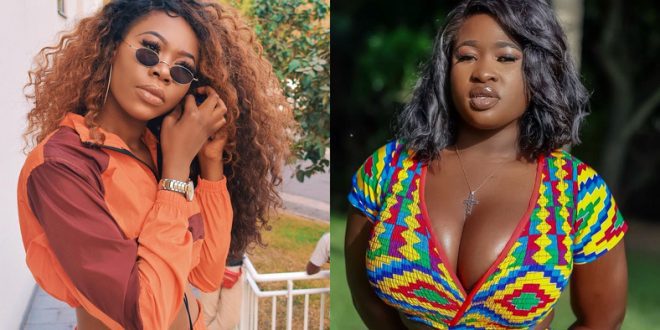 Sister Afia has revealed that she wasn’t the one who started the attack that happened between Freda and Herself at the TV3 premises. She points hands at Freda Rhymz claiming she started the fight but that side wasn’t captured by any of the trending videos.

Both parties were given the platform at UTV’s United Showbiz to speak on matters that got their beef intense. The host, Nana Ama Mcbrown asked Sister Afia why she was seen in the video attempting to attack Freda Rhymz and her response tends to mean she wasn’t the one who started the fight. She said Freda Rhymz used the word ‘Abrewa’ (old lady) for her when they met at the TV3 premises.

According to Sister Afia, she couldn’t remain calm as Freda started talking sh!t about her when they had not even entered the studios of TV3 and that led to the seen trending in the viral video.

“I got mad after the last diss song because she said I had sex with Bisa Kdei also when I met her at TV3 I wanted to approach her to ask why she said all of that, there I heard Freda Rhymz say ‘allow the old woman to come in’, Sister Afia said.