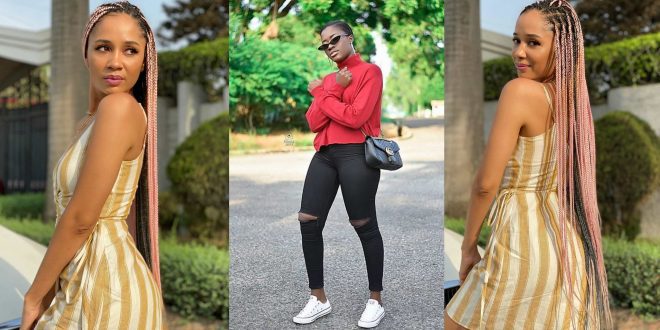 The two rivals over Medikal, Fella Makafui, and Deborah Vanessa aka Sister Derby has once again clashed on social media over the recent beef that arose between sister derby and the couples(Medikal and Fella). This time, Fella replies Derby after her claim to be the one who forced her(Fella) into music.

One could remember earlier that after sister derby featured in the ‘Force Them Play Nonsense’ track of Eno Barony, a fan replied to her saying “I never know Sis Derby was a singer till Fella came in the line. #carrier resurrection agency .”

This couldn’t see Sister derby quite as she also replied saying: “When you are too dumb to realize #SweetEx pushed traders to try and make music.” check it out.

After the brouhaha on Twitter between Derby and her critic, Fella Makafui has also stepped in to clarify that she was in the music business ever since. She shared a throwback picture of herself in a studio on Instagram and captioned it: “Nothing Westlife no go see for Empty Street 2014 I guess …back then I wasn’t even a trader.”