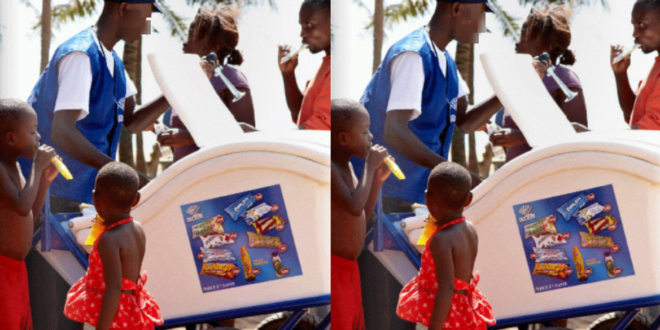 In this universe where we find ourselves, miracles never stop occurring.

In his early 20s, a young gentleman who happens to be a salesman at a Fan Milk depot at Ashaiman in Ghana’s Greater Accra Area was arrested and arranged before court for gambling with the sales of the business.

Saddick Amoah, the defendant’s name, is reported to have gambled with GH-7,000.00 that he made from sales with high expectation that he will win and repay the money from the earnings he earns and create a benefit for himself, but that turned out to be bad.

The depot manager’s , Ms. Thelma Bortey notes, she knows that the sum was lost and that their account books did not have any traces. . This persuaded her decision to report the aforementioned lost money to the police for investigation .
He admitted that he used the GH-7,000 for online gaming when Mr. Amoah was questioned by the authorities, believing that he might gain and compensate back before it could be noticed, but his loss culminated in his inability to bring the money back from where he took it.

ALSO READ  "Being single is boring"- Sandra Ankobia discloses she is lonely.

In an interview with journalists, Superintendent Afrifa Akwasi at the Ashaiman Circuit Court talked about the issue. He said that “Saddick Amoah was employed as a salesperson by someone in a Fan Milk depot in Ashaiman. Anyone who comes to make some purchases he takes the money.” So, he reports to his boss from time to time.

towards the end of January, he was requested by his supervisor to send into money her an account. he played  “hide and seek” with her anytime she calls him. “The director then decided to report to the police because he was not cooperating,” he said.

He was arrested for prosecution and in sentencing, he pled not guilty to the allegations. Therefore, the court ruled that anyone bails him of a GH-10,000 sum.