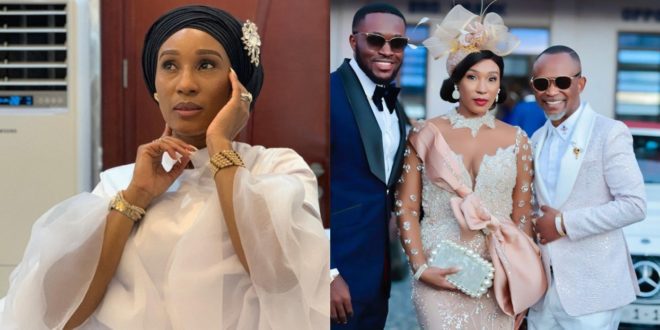 We have chanced on an elegant photo of the beautiful second wife Of the Ghanaian business Mogul Dr. Kwame Despite, Aunty Ewurama and it is once from the recent plush wedding ceremony of Cindy Ofori Sarpong.

Mrs. Aunty Ewurama has been married to Osei Kwame Despite for twenty-two years and they have 6 children. Even though Kwame Despite and his children have been making waves on the internet, not much is known about Ewurama.

ALSO READ: Dr. UN And D-Black All Hugs And Smiles After He Finally Apologized For Fooling Him

well in this picture, she was seen clad in a beautiful white and wedding-like dress as she posed for the camera together with her first son, Kennedy Osei and Fada Dickson – the general manager of Despite Media.

The picture was first shared on the official Instagram page of Fada Dickson with the caption: “Which sauce? Drip 🔥🔥🔥”