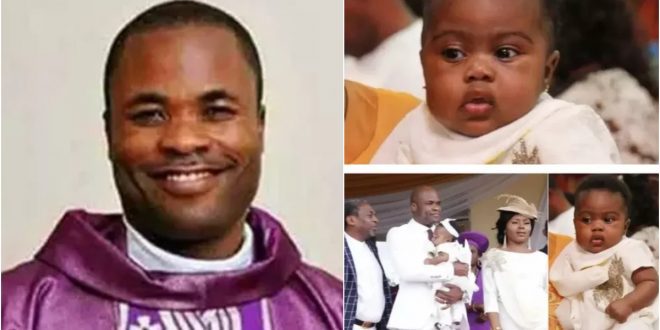 Patrick Edet was a Catholic Priest in the Uyo, Akwa Ibom state who announced his decision to discontinue as a priest of the Catholic Church with his reason being some issues that emerged.

He was a priest of the Catholic Church for about eleven years before he terminated his priesthood. His decision to Quit the Catholic priesthood was made public on July 31, 2017, during a radio interview he was granted on Planet Radio.

Since his resignation, he has started holding programs and Sunday services on his own as he has started a new chapel of his own which he has been able to win the hearts of those who loved him during the days of his priesthood.

He got married to his wife Inyene Sampson nine months after his resignation and that got people claiming that he had planed resigning before the issues also showed its head.

His marriage is blessed with this beautiful baby