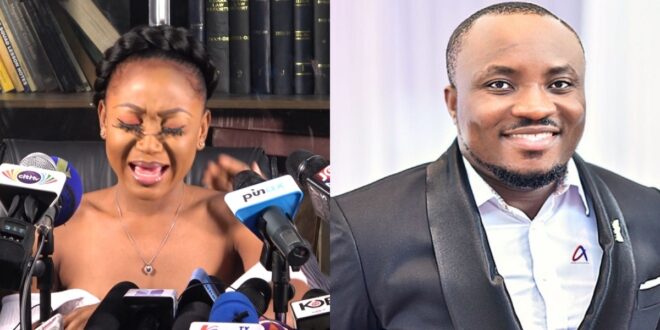 Everything Was Scripted … Including The Tears – DKB Exposes Akuapem Poloo

Akuapem Poloo held a press conference yesterday Saturday 24th April in which she expressed her gratitude and thanks to her supporters, colleagues, and relatives for their outpouring of support when she was detained.

During the conference, the ex-convict detailed her ordeal from the moment she entered the courtroom through to the moment her bail was paid.

However, one thing that caught the eyes of many watching was how Akuapem Poloo broke down in tears while discussing the topic.

Well, Ghanaian comedian aka DKB has got something to say about Poloo’s stunt. According to the comedian, yesterday on United Showbiz, all that Akuapem Poloo did was scripted.

He detailed that Akuapem Poloo’s lawyers wrote a script for her before she went online, and we would have noticed if we had paid attention.

He also revealed that it was scripted for the actress so that she sticks to the plot and would not utter something she shouldn’t.