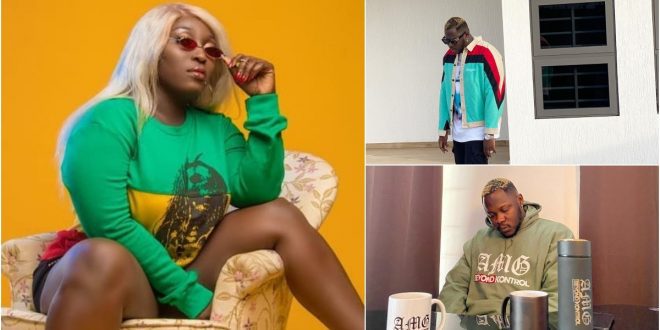 Rap goddess, Eno Barony has hit back at AMG Medikal after he jabbed her in his recent tweet.

Medikal in his tweet, claimed he wasn’t going to waste his time recording a diss song to a female rapper especially when she looks like a corpse.

Eno Barony on the other hand while replying to that said she was born dead so it’s not now that she’s going to become a corpse as she already knows. she also added that she never disrespected Medikal as her diss song was dedicated to sister Afia’s ghost songwriter.

In a series of tweets, she wrote:

“I understand you saying you never took a penny. Cuz what I gave you back then compared to now was actually a penny. NO BE TODAY I BE #CORPSE BRO I WAS BORN #DEAD. SO #YOU CAN’T KILL ME.”

“I appreciate u doing a verse for me way back and I have never disrespected u in any way nor for clout chasing, I only sent out words to the ghostwriter and unless u are the ghostwriter u can’t feel disrespected. Understand my lyrics first Mr. best rapper. #RapGoddess”