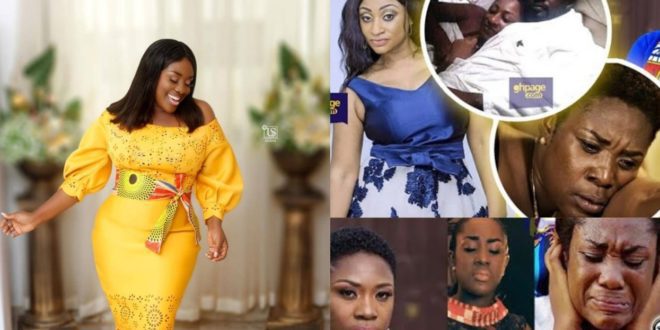 Emelia Brobbey speaks on her husband snatching and theft rumors

Kumawood actress and musician Emelia Brobbey has – in an interview – recounted tough times in her career based on false rumors that she got entangled in some time ago.

The actress who is now promoting her new song with Kuami Eugene disclosed to Halifax Addo – while having a discussion on Okay FM – how she managed to live to the best of herself after facing these ordeals. She revealed how she has survived rumors about snatching someone’s husband and also stealing a bracelet in London in the past.

On how she manage to do that, Emelia brobbey claimed it is due to the fact that she hardly comments on all the allegations leveled against her. She expressed that she would rather let her life either see to any rumours out there and as such the rumors die off easily. Also, trying to clear her name is unnecessary in her opinion.

ALSO READ Angry Emelia Brobbey slams critics: “Don’t listen to my music if you think it is bad”

The Okukuseku Show host also recounted how she dealt with criticism regarding her debut single Fa Meko. She admitted that she was initially worried by the bad reception her song received but was able to set it aside and now she s no more affected by insults from haters.

Emelia Brobbey was particularly unsettled by Halifax’s persistent question on why she chose to do music and according to her, she even had a song out way before ‘Fa Meko’ to prove music is not just a ”borrowed” career.