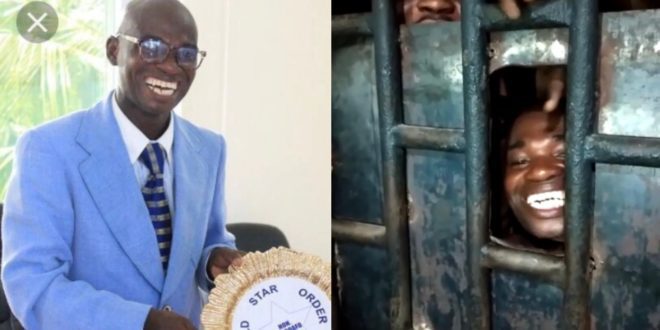 Reports available to us indicate Dr. Kwame Owusu Fordjour aka Dr. UN who succeeded in ‘scamming’ some big faces in Ghana through his fake awards – has been arrested. It also indicated that the arrest which took place yesterday occurred at the premises of Kumasi based Hello FM.

In a video attached to the reports, the self-acclaimed United Nations representative is seen challenging the police officers who were in plain clothes on their bases for his arrest. Dr. UN insisted he has done nothing wrong but the officials who claimed to have a warrant for his arrest.

The main reason for the arrest was however not detailed but it has been revealed by Peace FM’s Ashanti Regional Correspondent, Samson K. Nyamekeye that Owusu Fordjour has been on the wanted list of security officials for a while now.

He was apprehended and granted bail sometime ago at the Magistrate Court in Asokore-Mampong after organizing a fake award at the Kwame Nkrumah University of Science and Technology (KNUST) in Kumasi.

Dr. Owusu Fordjour, according to the reports could not meet the bail conditions and it happens to be the reason a warrant was issued for his arrest.