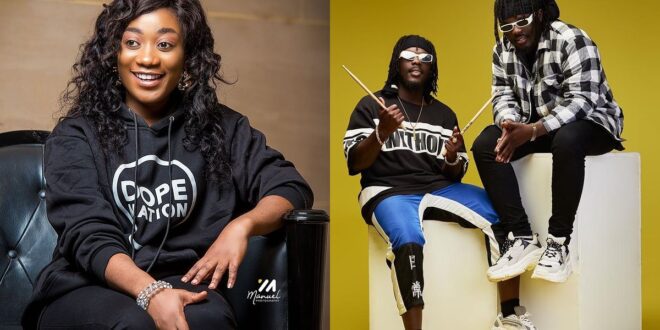 A beautiful blind Ghanaian singer identified with the stage name ‘Adelaide the Seer‘ has revealed how she found her way into the Ghanaian music industry after the award-winning artists Dope Nation discovered her.

The Seer disclosed in interview with Chelsey Sey on Y 97.9 FM’s Ryse N Shyne show that;

“After I lost my sight 8 years 3 months ago, I was just home singing because singing has always been a part of me”.

“While I was home singing, my aunty used to post short videos of me on social media. So a few weeks ago, I got a call from DopeNation saying they wanted to meet, and fast forward we got to the studio, recorded and I entered the music industry by releasing a song with them”.

the 25-year-old singer speaking on how she was discovered said that;

“they saw the video I think three (3) weeks ago if I am not mistaken and we just recorded this song last week Wednesday.”

she added that her arrival into the Ghanaian music scene has been good. “So far it’s been good and I’m very excited and also very grateful to God for everything. I know the attention comes with it so I’m okay with that”.

“at the moment I’m partially signed to DopeNation’s record label and from the look of things, we’re working around me being a full member of the label”.

ALSO READ  Take a look at how stunning Adelaide the Seer has been in the last few weeks.
Share