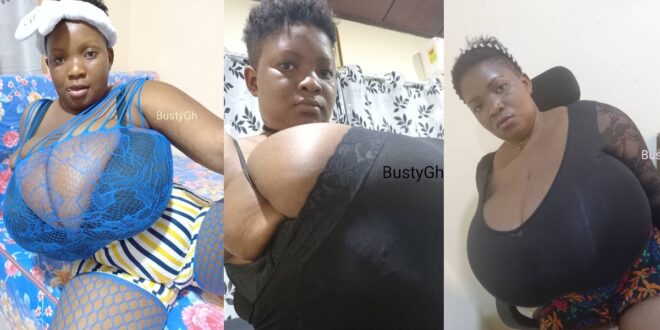 Heavy loaded-chested Busty GH, a Ghanaian beauty expert, has urged women not to be afraid to expose their breasts in front of their husbands so that they can play with them.

She told the host of e.TV Ghana’s adult show In Bed with Adwen that some women like to leave their braziers on during love-making because they are shy.

This, though, can never be the case, in her view;

“If you’re a woman with plenty breasts, I don’t think you should always cover or hide it from your man. You’re alone with your man in the room so I don’t see any reason to be shy. Pour out your boobs so that he can play with it well and then you can also reach orgasm”,

Busty revealed that she enjoys having her breasts caressed, fondled, and sucked, but that it must be handled softly and with care, rather than roughly as though it were a boxing practice.

As previously said, Busty Gh, born Joyce Addo, rose to prominence in Ghana after her recent interviews with various Ghanaian media outlets, which drew a lot of attention due to her large breast.