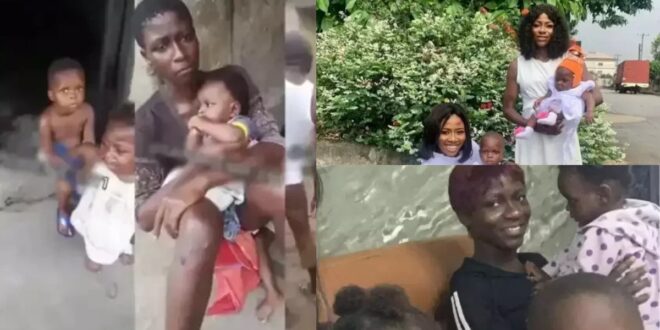 Do you remember The Poor Lady with Three Children? See How Her Life Changed

Goodness had become so frustrated and confused that she was about to throw her three children away and run away. Friends and some worried family members convinced her that it would be a wrong decision to leave her children.

She revealed that, after promising her marriage, the father of the children fled and still couldn’t fulfill it because he was financially broke. She wished and believed that, even after two daughters, one day the man would have the money to marry her. But for the third child, the narrative changed when she got pregnant.  nHe then began complaining that his mother did not want him to marry her because she was not a graduate.

A kind lady took an interest in her story and used her video to seek support from Nigerians.

People were profoundly touched to see how this young mother, with three children, was hurting. People pledged to support her with money, food, clothes, and other essential products.

She is actually doing fine, and her kids have grown to be lovely.

It is incredible how her narrative has moved from grass to grace. Only God could do this.