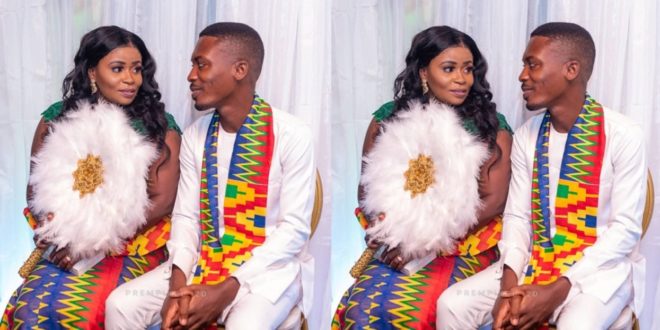 Clemento Suarez speaks for the first time after his private marriage

Ghanaian comedian, Clemento Suarez has for the first time shared instances that got him tying the knot with his girlfriend over the week end.

Clement Ashiteye, as he is know in real life, shot to the limelight through the Joy Prime’s Kejetia vs Makola skit and since then he has managed to gain a name for himself as one of the top comedians in Ghana – with people always finding humor in everything he does.

This weekend, Saturday, october 25th, Clemento Suarez took his fans and Ghanaians aback after news broke that he had married his longtime girlfriend in Kumasi – as he never publicise not gave hint about it.

After his wedding going viral, he has for the first time shared his reaction as he called out some top female celebs who never returned his love when he proposed to them – hence he went forward to marry girlfriend, who has been identified as Sylvia Bioh.

In an instagram post, Clemento Suarez shared a picture of himself holding some balloons. He revealed that actress Cecilia Gyaase konamah widely known as Abena Ghana turned down his marriage proposal.

“@abenaghanaofficial when I proposed to you with balloons you rejected me…Now…” he captioned.

“@she_loves_stonebwoyb when I proposed to you,you said I should go and cut my hair ….” he captioned another picture with the staunch stonebwoy supporter.