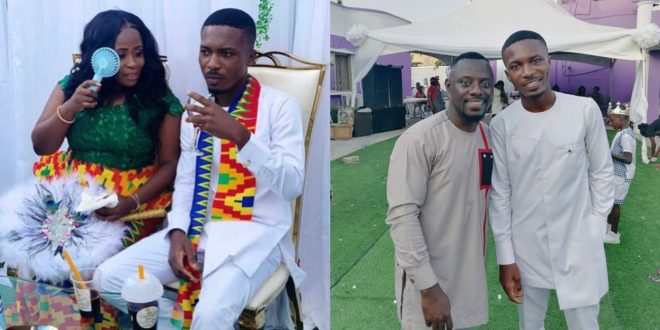 popular comedian, Clement Ashiteye popularly known as Clemento Suarez got married to his longtime girlfriend at a beautiful traditional wedding.

The ceremony which came off at Kumasi on Saturday, 24th october saw the appearances of many a few celebrities including his colleague, Lawyer Nti of Kejetia vs Makola.

Apparently, Lawyer Nti was the first to report on social media that the comedian had walked down the aisle after sharing a picture with him on instagram with the caption:

Glory to God. Happiest day of my life! Grateful to God for everything. Superman @clementosuarez, we love you, man. ❤️😊🕺🏾.

Details about Clemento Suarez’s wedding was a bit sketchy since it was a private one and no formal announcement were made but we have chance on a video from the ceremony.

Ths video captures the moment the new couple hit the dancefall and danced to the beginning of their new life together with Diana Hamilton’s “Mo Ne Yo” song which played at the background.