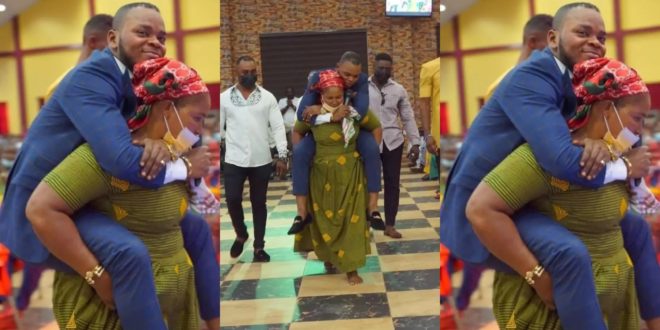 Church member carries Angel Obinim at her back in new photos

A new photo of Bishop Obinim is currently trending online and it has got people talking all over the internet.

The picture sees the founder of International God’s way Church being carried by one of his female church members.

looking at the pictures, it is obvious the Obinim was enjoying the ‘softback’ of this elderly woman as he was seen with a smile on his face.

Though it is unclear what was going on in the pictures, we are made to believe that it is one of those ‘Bizzare spiritual directions’ as the man of God is noted for such.

Meanwhile, according to our checks, the picture we not taken lately as Obinim has seised operations of all branches of his Megachurch after the platform was opened for churches to operate.

ALSO READ  Building A Fanbase Like SarkNation, SM And BhimNation Is Not Easy - Kidi Reveals

It has been revealed the he did so to evade the many Covid 19 protocols to be followed since he was having hard time seeing to them because of the mass congregation of his church.