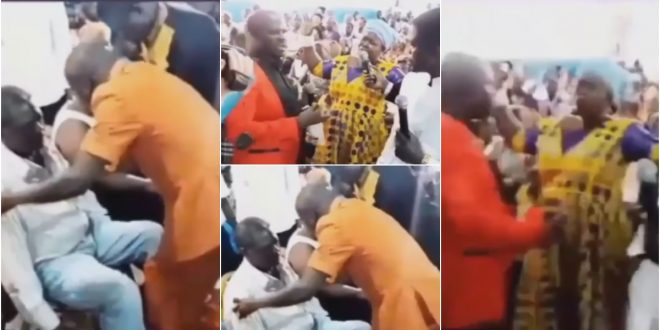 A throwback video of the late Pastor Apraku My Daughter has been spotted online and it captures his days of healings and prophecies.

The late Evangelist Emmanuel Kwaku Apraku aka Apreku My Daughter was a very powerful preacher and a man of God who manifested God’s work throw lots of healings and miracles in the ’90 and 2000s’.

During those days, The work of God was not much profitable as it is now but for a pastor to have 25 branches all by himself, he would be able to make earns meet. That wasn’t the case of Apreku My Daughter. All 25 branches of Apreku collapsed and most of his archived companies were also sold leading to a very severe financial strike on him.

This dramatic life of Apreku My Daughter from a famous and rich man of God to a very poor man couth up in drinking got many suggesting he was a fake pastor those days. He recently passed away following a video of him drunk went viral.

Well, we have come across a video that captures Apreku My Daughter’s powerful days where he manifested the works of God and was also reach. In the video he is seen delivering and healing the sick in his church and also making lots of prophecies.