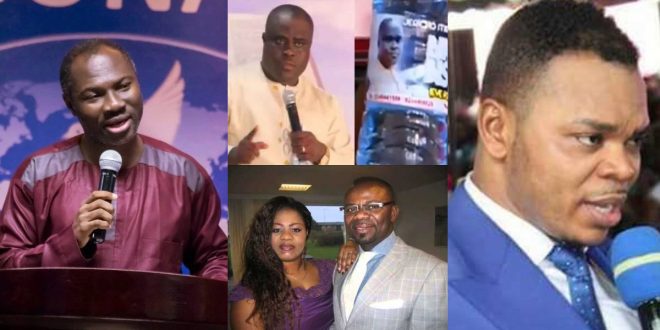 Kennedy Agyapong, MP for Assin Central has shared with Ghanaians the tall list of fake pastors who have reached out to him pleading to him so he put a stop to his expose’.

Taking to Net 2 TV, the Television station he owns, he listed these four men of God as people who have called begging him to reconsider his decision on exposing them.

Badu-Kobi was accused by Kennedy Agyapong of killed his son and burring him in the precinct of his church and also sacrificing one of his associate pastors.

Kennedy Agyapong disclosed that the prophet has called him privately and begged no to further expose him.

He was accused of being scandalous for selling miracle water, food, and ointment at a very high price with the excuse of he blessing it.

Kennedy Agyapong said Prophet Naakwa Isaac went on his knees with sobs to render an apology to him through his brother, Danquah.

The ex-husband of gospel musician Christina Love, Mr. Hammond Love has called to admit his evil dealing that he was accused of.

On the program, Kennedy Agyapong said the said pastor, through his friend, called to apologize and admit to committing the said acts

Obinim has suffered a great deal in the hands of the Honorable minister and even landed in cells which he is yet to face trial.

Kenndey Agyapong revealed that Bishop Obinim has tried several times and through different means to get him to heed to his pleas but he is not giving in until he is humiliated.