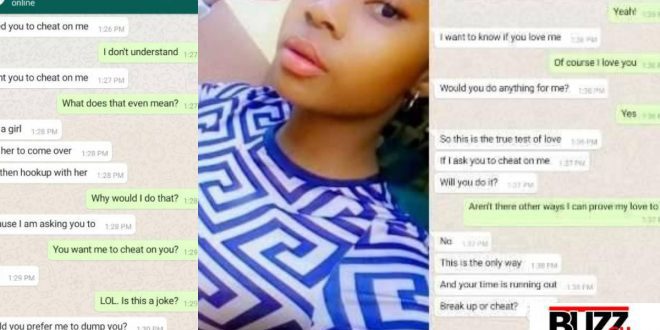 A Twitter user identified as Funny Banter has shared some screenshot of a conversation between him and his girlfriend which is quite weird.

the lady in the screenshot of their chats asked his boyfriend to cheat on her or he loses her.

according to the lady in the chat, in other to know that the guy loves him, he should cheat on him as she asks him to do.

their chat went on as the lady persuaded his guy to call his ex-girlfriend and called er over of which the lady agreed to come.

and that is where all their conversation twisted as the lady then accused her guy of cheating on her with his ex-girlfriend as why will she just agreed to come over soon.

read their conversation below;