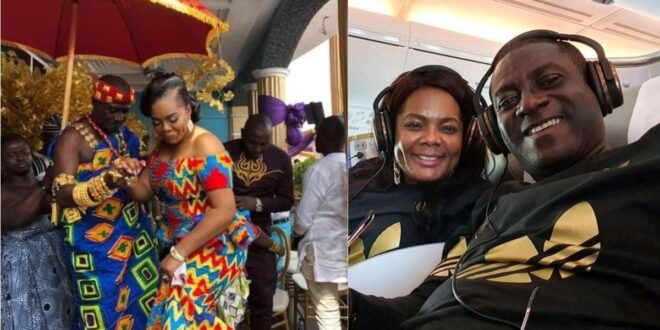 Captain smart flaunts his wife for the first after getting married a year ago (photos).

The love life of captain smart, who is a presenter at Angel TV/FM is very complicated with many strange parts.

Captain smart has been married before his current wife, but he got divorced over private issues with his ex-wife.

According to rumors, Captain smart’s ex-wife left her husband and kids in Belgium to come and remarry captain smart in Ghana.

After the Divorce with the Belgium lady, Captain Smart is now married to a lady called Akosuah, they had a beautiful traditional wedding in 2019.

Not very long after the marriage, a gossip by the name Obaa Vida revealed that Akosuah was also married to a man in the united states and already had 4 kids with the man.

Further investigations into this allegation revealed that Obaa Vida was lying and that Akosuah Lived with her brother in the United States and it was him that rather had the 4 kids.

Nevertheless, Captain Smart has taken to social media to share a picture of himself and AKosuah in a plane jetting off to an unknown location.

Captain Smart in the caption of the photo told his wife how much he loved her.

If I had the words to describe my feelings for you, I would be the happiest man in the Universe. But words seem to fail me time and time again. Honey Your touch, your heartwarming smiles, your presence and soul mermerizes and entangle me completely. If I had one ambition, one utter goal, It would be to stay by your side for eternity. Thanks for giving me what I needed most in life; Emotional stability. I don’t know how you did it but you have redesigned and properly occasioned the future. Your conscious efforts and sleeplessness to make my plans work is amazing. Indeed you are a clear representation of Proverbs 31 : 10 – 31. My everything is Yours.
I LOVE YOU.” he wrote.