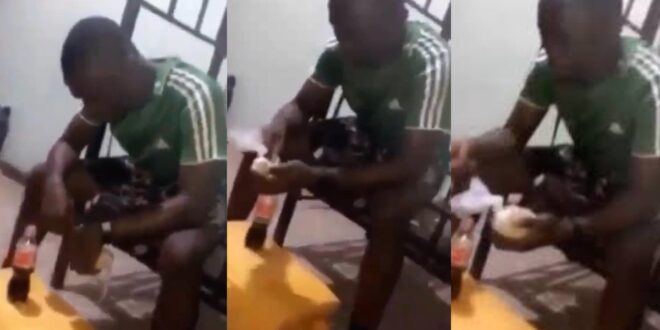 A young man with a broken heart enjoys banku and Coca-Cola.
Some of the experiences that brokenhearted people, especially men, go through seem to be horrific at times. Others would go to great lengths to end their life if they can no longer bear the suffering.

An anonymous young man was filmed eating Banku with coke in a recent viral video on social media after his girlfriend broke his heart.

It’d be strange and there’s no way a local food banku could be consumed with Coca-Cola.

According to the heartbroken man, he made a video call to his female lover only to discover a different guy appeared in the video, leading him to accuse his girlfriend of cheating on him with the guy.

He sipped the coca cola while chewing the banku out of desperation.