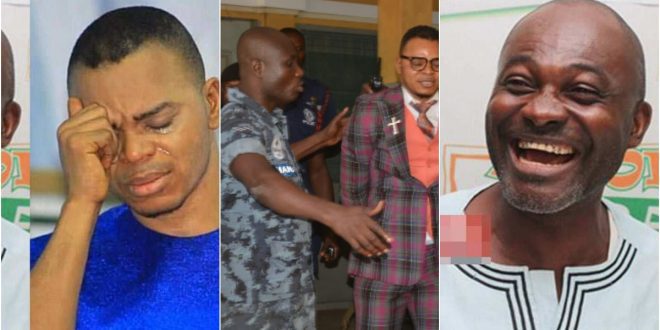 Bishop Obinim Speaks For The First Time After His Arrest

Bishop Daniel Obinim has finally spoken for the first time after police arrested him.

we reported a few days ago about the arrest of Bishop Obinim, the founder and leader of International Godsway Church by the Ghana police for his crimes.

well, according to the spokesperson of Obinim, Richard Jackson in a statement, all reports that Obinim was arrested by the police and pretended to be sick are all false.

revealing that, Obinim had an appointment with his doctor that day which coincided with the police coming to his house.

part of the statement reads;

“Under no circumstance should anyone lie to you Angel Obinim has been rushed to the hospital. I urged the public to disregard all such rumours as there is no truth in it that he has being arrested by Ghana Police,”

“Angel Obinim was in the house doing fine, he hasn’t been arrested nor kept behind bars so throw away that fake news making rounds”.