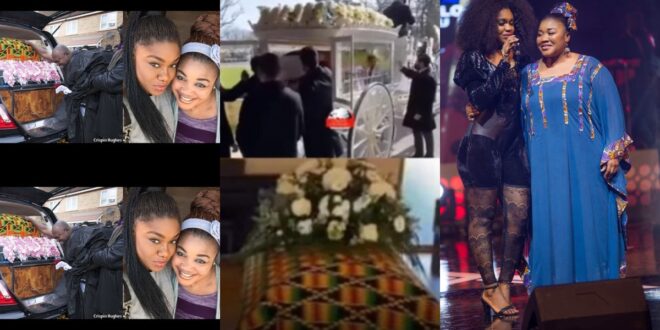 Ghanaian musician-Becca can be described as many things—arrogant, disrespectful, a hypocrite and even roguish. But I don’t think anyone expected her to show such gross impertinence by failing to show up at the burial of her mother-Juliana Yiadom Oti who died in London on 7th January 2021.

And the family of Juliana Yiadom Oti in London who were not amazed as Becca’s failure to attend the last Saturday burial service anticipated her contemptuous behaviour—and therefore completely cut her off from the mentions in Juliana Oti’s ‘Celebration of Life’ book.

I mean, the biography of Juliana Yiadom Oti which was featured in the ‘Celebration of Life’ book handed out at the burial and church service did not mention Becca as a daughter. She was not recognised and I applaud the family for this.

After all, a daughter who fails to respect her mother or make peace with her when she was alive and continues to hold resentment towards her even after he death is not a daughter at all.

Becca did not make peace with her mother before she died. In fact, she did not even attempt to reach out to her following the media outburst about 2 years ago. Yet, when the mother died, as expectant of a hypocrite, she took to Instagram to say she was hurt by the death of her mother and that day was the most painful in her life.

Considering the above, the family expected that Becca wouldn’t show up for the burial to pay her last respect to her mother. I was hoping she would surprise everyone and make a humble appearance to demonstrate that the death of her mother has indeed caused her pains and has made her realize the tension that existed between them was wholly needless.

But once again she proved that, being arrogant usually gives no room for remorse or quiet reflections.

It’s expected that Becca would say she probably did not have a visa to the travel to the UK but the truth is, Juliana Yiadom Oti died on 07 January 2021 and her burial took place on 19 February 2021—that is more than enough time for anyone to make travel arrangements to attend.

I’ve been told that she didn’t even call the family in the UK—and I mean her step-brothers and the husband of her mother or even her mother’s sister.

In fact, as common of all rogues, Becca organised her own Thanks Giving Service in Accra, Ghana—for her deceased mother, separate from what the family had sanctioned and were doing in the UK.

In the ‘Celebration of Life’ book, Juliana Yiadom Oti’s other two children—young boys—who were born in London when she moved to the UK wrote a touching tribute to their mother. These were the two boys who were mentioned as her surviving children.

The boys wrote: “You were the most wonderful mum, a treasure that can never be replaced. You matured us with your tender love and supported us in every way. One in a million, we will never forget the precious time we shared as a family. We will always deeply cherish the memories we have of you.”

Juliana Yiadom Oti’s husband also wrote: “God blessed me with a special gift, a beautiful woman to love. My wife, my life partner, my best friend, my hero. The mother of my children so loving, tender and a blessing to our home.”

Now that Juliana Yiadom Oti is gone, let’s hope the regret does not set in for Becca as soon as we expect.