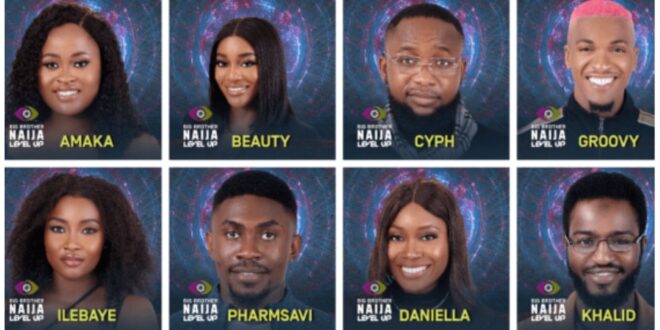 Today marks the final day of the Big Brother Naija (BBnaija) countdown as Ebuka Obi-Uchendu will officially launch the seventh season of the reality television program at around 7 p.m. (WAT).

This will be the seventh episode, and just like previous ones, it is expected to feature plenty of love triangles, heated discussions, shocking evictions, and fierce competition for prizes worth N100 million.

This year’s BBNaija season 7 show features 12 housemates. As the show premieres, here is a round-up of our favorite participants who are going to rock us with a lot of thrills in the coming weeks.

Groovy, a 26-year-old native of Anambra State who is also a model, artist, and business entrepreneur, is ambitious.

He graduated from the University of Lagos with a B.Sc. in Biochemistry, and he values maintaining a healthy lifestyle and working out. He calls himself “a joyful, self-assured

Beauty Tukura, also known as Beauty, is the second housemate on BBNaija 2022. She is a 24 years old lawyer from Taraba, Nigeria. Beauty believes that by expressing her true self, she is ready to raise audiences.

She claims that while fans would admire her for being real, housemates will despise her for being extremely emotional and expressing it with all seriousness.

Khalid Ismael, also known as Khalid, is the third housemate on BBNaija 2022.

Khalid is direct when he admits that he can’t cook and might be caught drinking in the house.
Khalid thinks his charisma, intelligence, and good looks will be enough to help him win the N100M.

Ilebaye, who is from Kogi State, has said that viewers shouldn’t anticipate seeing her engaged or dating anyone on the show.

Ilebaye is not here to waste time. She pledges to bring Biggie’s House all the Gen-Z vigor.

Cyph is from Mbaise in Nigeria’s Imo State.

Cyph, or Bright Erekete, is a tech guy who doesn’t believe in love at first sight.

Cyph is a foodie who will use any occasion to eat his favorite cuisine.

Cyph intends to have it with the other housemates while keeping an eye on the final price.

Chiamaka Crystal Mbah, also known as Amaka in the BBNaija house. Amaka works in the medical field. She is 23 years old and from Anambra.

She refers to herself as Nigerian Nicki Minaj. Amaka goes on to say that she is “single to the last letter of the term.”

Kesiena, also known as Kess, is a married 28-year-old man from Delta state. Kess claims that his wife gave him a free pass to appear on the show.

He values his family more than anything else. He is a fighter who has left everything he owns outside the house.

By simply making difficulty and vibrating, Kess will take it to the next level. He defines himself as a trustworthy and enjoyable guy.

She is sensitive and enjoys eating, sleeping, and partying. After Ilebaye and Beauty, she is the third female housemate.

She intends to make her presence felt and seen in the House. Housemates may rely on her because she vows not to steal food.

Saviour Akpan is from the state of Akwa Ibom. He is quite self-assured, a gentleman, and has a great sense of humor, according to PharmSavi.

At first, he doesn’t think that love exists. He identifies himself as a low-key performer and a pharmacist.

Ijeoma Josephina Otabor, also known as Phyna, is a 25-year-old Odo state resident.
Phyna is the tenth housemate on BBNaija Level Up.

She professes to be irritable and pledges to bring a variety of things to the house, including violence.
She considers herself cheerful and has an aversion to gossip.

Phyna is a natural entertainer, and one of her skills is mending household appliances. Her graduation from a higher education institution was one of her proudest achievements.

Bryann was born Brian Chkuwuebuka Chiji. He is 24 years from Imo state.

Bryann is a singer-songwriter who began her career in 2019 and is inspired by Wande Coal, Vybz Cartel, and Angelique Kidjo.

Bryann is a cautious and down-to-earth personality who considers himself an extravert.

Bryann has random bursts of energy as well as low-energy days, but he understands how to maneuver people in either setting.

Christiana Oluwafunke Ojumu, often known as Christy O, is a 24-year-old beauty entrepreneur who owns and operates a cosmetics company.

Christy O is a witty, intelligent, and hardworking extrovert who is always “where the fun is.” She enjoys picnics with her close friends, hiking, and composing poems.