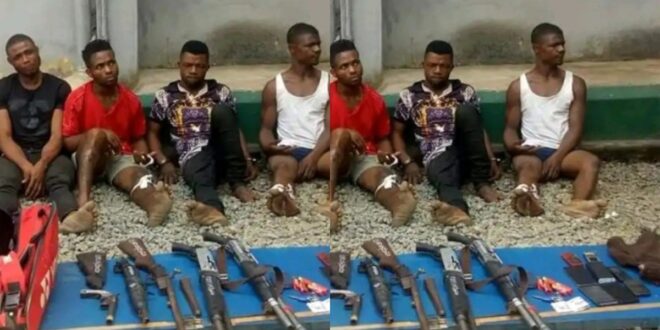 Armed robbers who K!LLED a couple in front of their kids caught  [Photo]

The murder of this couple was sad because it happened in front of their kids.

The Abia state police force paraded about twenty people, eighteen men and two women, in Umuahia and Aba, the commercial hub of the state for numerous offenses including armed robbery and kidnapping.

The most famous offenders were a group of armed robbers and kidnappers who murdered a husband and wife as they were taking their children to school.

The Couples from Ebonyi state were known as Mr. and Mrs. Darlington Uzonwa.

They were murdered by the robbers because they thought the couples recognized one of them and would betray them.

It was also discovered that the kids asked the robbers not to kill their mom after they fired at their dad’s head, but the robbers did not listen.

The Commissioner of Police in the State said he headed the police anti-robbery squad that went after the gangsters when they were informed of the incident.

According to Okon, the police arrested the thugs two hours after they committed the crime but kept it hidden from the public while they were searching after other members of the gang that was at large.

He said the group was headed by an enigmatic robbery gang chief named Grave who was killed last year by the police during an alleged robbery.

ALSO READ  Shatta Wale Shows Off His $300,000 Mansion For The First Time - video

He sympathized with the family members of the murdered couples and prays for them to heal from the tragedy.

The children of the late couple knew the killers were guilty and wanted justice. The police commissioner advised the kids that the murderers will be executed if they are identified.