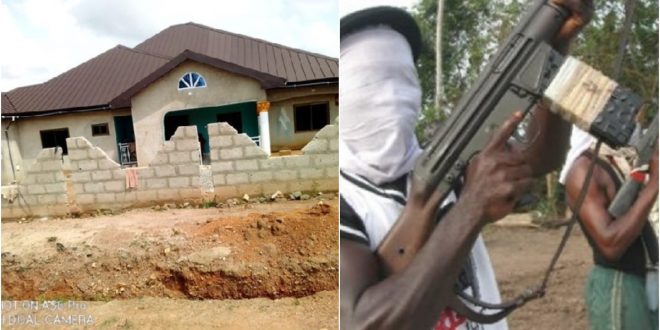 Armed robbers have killed a pastor’s pregnant wife and stab their 3-years-old daughter in Kumasi.

The incident happened on Saturday, 20th June 2020 at Heman/Ampatia New-Site, an urban community at Santasi in the Ashanti Regional capital, Kumasi.

According to reports the pastor who has lost his pregnant wife if identified as Pasto Francis Adusei, the founder and leader of Mountain Zion International Church.

from reports, the armed robbers requested money and they gave it out to them but the unfortunate thing is that the rubbers requested for more and stabbed the 3 years girl after the pastor said the money is finished.

Looking at how their daughter was bleeding the pregnant wife then struggled with the robbers which made them stabbed her as well and died a few minutes after.

“They were three young men, two wielding kitchen knives and the other holding a pistol. They pushed him inside his bedroom and demanded that he handed over all the monies he recently withdrew from the bank,”

“The poor little girl started bleeding profusely and so the deceased, who could not withstand her daughter’s ordeal attempted to overpower the robbers but unfortunately, she was also knifed at her right neck. She fell unconscious and died minutes later,” other family members narrated as she shed tears.

fear has since gripped the residents of Heman as they claim this is the fourth time such an incident has happened since last year.

ALSO READ  "Any man who takes a loan to marry is a fool"- Pastor reveals.

67-year-old Victoria Abareman who is a resident said

“If we can revive the watchdog committee that will be helpful because where we are now, we are all worried. The situation is very appalling and I pray authorities to come to our aid,”.

“It appears our security can’t be guaranteed. The community has built a police station in this town but personnel is yet to be deployed to man it, and so as you can see it has been taken over by weeds and reptiles. We pray that one day this project will serve its purpose,”.