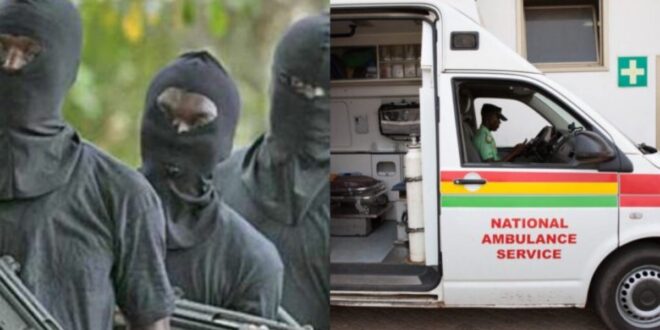 Armed Robbers attack ambulance with woman in labor in Somanya

Highway armed robbers fired an Ambulance driver rushing a pregnant woman to the hospital from the Akuse Government Hospital to the Eastern Federal Hospital in Koforidua.

The ambulance driver who was shot in the head is in serious condition and has been transferred to the Korle Bu Teaching Hospital from Tetteh Quarshie Memorial Hospital.

The incident happened on the Somanya road to Adukrom on Thursday morning.

Starr News reported that the driver in charge of Yilo Krobo Constituency Ambulance with Registration Number GV 644-20 had taken a woman who had been on pre-term service (31 weeks) from Akuse Government Hospital to Eastern Regional Hospital because Akuse Hospital did not have a neonatal intensive care unit (NICU).

The truck, however, bumped into the robbery action on the road while speeding and refused to stop. The armed robbers opened fire on the Ambulance and wounded the driver in the head.