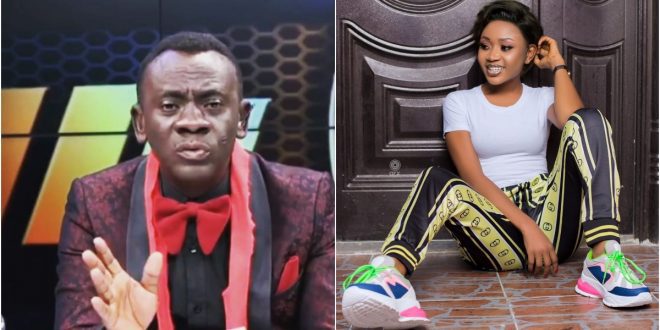 “Are You The Only Single Mother In The World, What Sort Of Disgrace To Womanhood Is This?” – Angry Akrobeto Blasts Akuapem Poloo

Popular veteran actor  Akwasi Boadi Akrobeto aka ‘Who nose tomorrow’ has also scolded the Ghanaian socialist and actress Rosemon brown Akuapem Pollo over her Nude picture with her son.

Taking to UTV ‘Real News’ program in addressing the issue, Akrobeto stated that Poloo should bow down her head in shame as she is a disgrace to womanhood.

Akrobeto advised that this is not the best way for Akuapem Poloo to gather attention and if she did it to amass wealth, then her money is classified as a filthy one.

he however stressed that going nude is not the only way to get money as he mentioned decent female celebrities in the like of Jackie Appiah, Emelia Brobbey, Nadia Buria, Nana Ama McBrown, Vivian Jill and others.

Akrobeto also petitioned the Minister of Gender, Children and Social Protection, Madam Cynthia Morrison, and other authorities to punish her so that it will deter others from doing the same in the future.