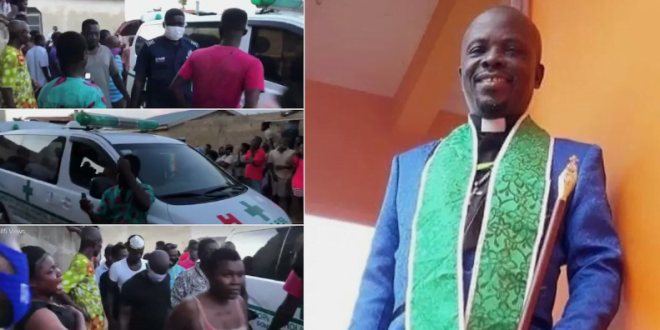 The daughter of Evangelist Apreku My Daughter has revealed matters concerning her father’s death in a recent interview she was granted on Okay FM.

The death of Evangelist Apraku aka ‘Apreku My Daughter’, one of the prominent men of god during the ’90s and early 2000s is one that has hit Ghanaians hard. This sudden incident happened earlier Yesterday. Many believe that May his soul rest in peace.

Recently there was a viral video circulation that captured Apreku My Daughter drunk and in a devastating state. This caused people to look twice at people calling themselves men of God. On the other hand, many believe that, his death was a suicide since he couldn’t stand the sort of disgrace he brought on himself others also believe he died out of hunger.

His daughter, speaking in an interview, revealed that they (herself and other relatives) met their father’s dead body in his room this afternoon when they had gone to visit him.

According to her, She doesn’t stay with the Father but only goes there to visit him and also help him in a couple of stuff. she added that upon visitation yesterday, they did not see him around the compound as they use to so asked the neighbours but they were told they’ve not seen him the whole day.

This realization made them ask questions that how’s it possible that they’ve not heard from their neighbour but did not bother to check on him?

They knocked on the door but got no response. This caused them to break the door down and upon entering, they saw their father on his bed dead.