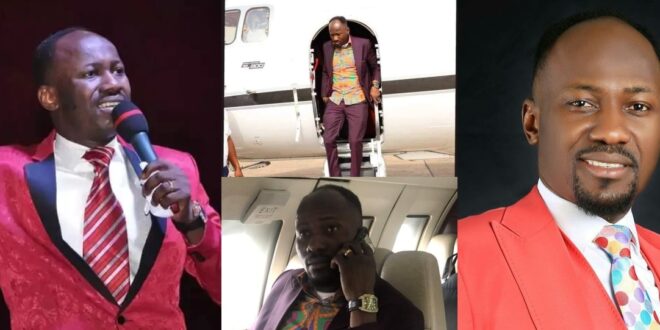 “You will D!e if you complain about me buying a third private Jet in Jesus name”- Apostle Johnson Suleman

People who are furious that Apostle Johnson Suleman purchased his third jet after the COVID-19 lockout have been cursed.

During the raging COVID-19 pandemic, which pushed the world into economic crisis, the General Overseer of the Omega Fire Ministries International said in a viral video that he purchased his third plane.

The cleric went on to say that he was hoping for the pandemic to continue because he was prospering and sleeping at the same time.

He said, “In COVID (pandemic) I bought a jet; the third one. I have three. I was praying for COVID-19 not to end because I was resting. While people were complaining, my wife asked, ‘Can life be this sweet?’ Am I talking to somebody here?

“Somebody asked if it’s true and I said it is true. They said, ‘It’s risky o’. I said I didn’t know it’s risky because I already bought the machine. When you speak in tongues, you’re printing money.”

In a recent video that went viral, Apostle Suleman admitted that he made a mistake when he said, “I was praying for COVID-19 not to stop.”

Many who are furious that he purchased another private plane, on the other hand, will “die” according to him.

ALSO READ  "I slept with my daughter because my wife is no longer attractive"- Man says after he was arrested.

Below is a link to Apostle Suleman’s most recent video: