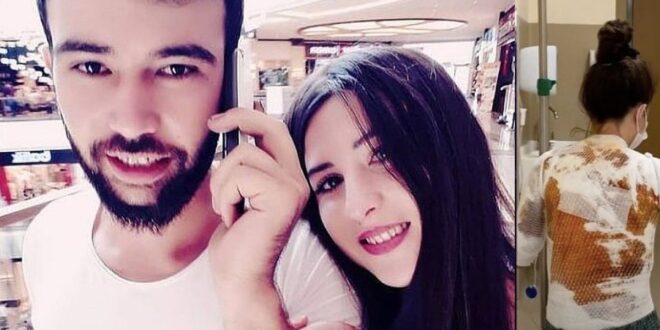 An angry man identified as Ali Ay has reportedly poured hot water on his wife Rukiye Ay for waking him up for breakfast.

the 28-year-old husband has been accused by his 23-year-old wife of pouring hot water on her after she tried surprising him with breakfast in bed.

according to Rukiye Ay, she tried to surprise her husband with breakfast in bed but he got angry when she woke him up.

the lady while on the sick bed narrated that, she left the bedroom and went to eat with their daughter after noticing her husband was angry.

Rukiye Ay claimed her husband, Ali woke up in an angry mood and told her he is going to divorce her.

she all of a sudden saw her husband pouring hot water on her, Rukiye Ay claimed her husband wanted to pour it on her face but she dodged.

from photos as we sighted, Rukiye Ay has gotten a serious burn all over her back and hands.

“I prepared it all and then went to tell my husband he had breakfast in bed. He was angry and demanded to know why I woke him up, and told me not to bother him, so I started having breakfast with my daughter.

“He came in still in a bad mood and told me he was going to divorce me and gain custody of our daughter no matter what I did.

“He then poured boiling water down my neck. He was going to throw it in my face but I turned away.

“I ran away and could my T-shirt sticking to my skin. He then threw the rest of the boiling water at me and some of it landed on my child’s feet and the rest hit me on the hip.”

Rukiye Ay claimed the police arrested her husband but he was granted bail and through the help of the neighbors, her husband was arrested again and has been detained.

“I couldn’t believe it, as long as he is free me and my daughter are in danger.”