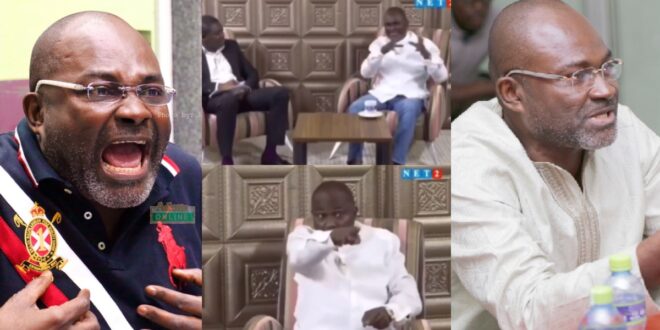 Kennedy Ohene Agyapong, who represents Assin Central in parliament for the New Patriotic Party, is a man whom every Ghanaian, regardless of political affiliation, despises.

The above-mentioned legislator is well-known for taking the most honest stand on issues, which is why any critical thinking Ghanaian, including NDC supporters, admires him.

Kennedy Agyapong has now chastised the executives of his television network, Net2, for their “foolishness.”

He was angered when the management of the TV station decided to broadcast advertisements for almost 15 minutes before a scheduled interview with him.

About the fact that the station’s management will think they are making money, he believes that this “foolish” decision will lead viewers to go to other networks.

ALSO READ  "My husband is in Jail, but I am not broke"- Princess shyngle.

“use yourself as an example, look what you have done here, it is bogus. Let me tell you, how can you think I have to come here to manage everything?”

“This is a foolish act, what kind of nonsense is that? I’ve been sitting here all this while and all you do is an advert?… which TV Station will you go to and they will load plenty of adverts like that with the panelist just sitting there?”

ALSO READ  Kennedy Agyapong warns Nana Agradaa, says she is next to be exposed for human sacrifices (video)
Share