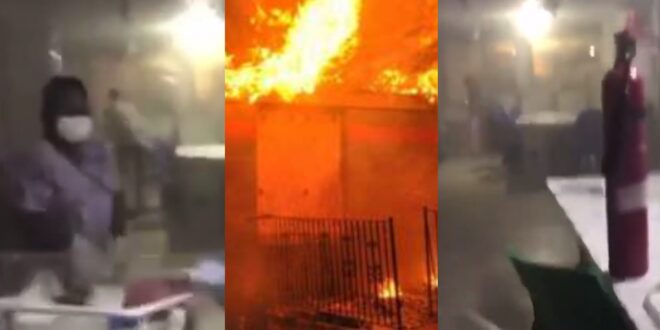 All you need to know about the fire outbreak at Korle-Bu maternity ward.

In the late hours of Tuesday, April 6, 2020, a fire outbreak was reported at the Korle Bu Teaching Hospital.

The suspected fire began in the maternity ward of the country’s largest hospital.

Health personnels run out recently born babies to save their life in a video that was uploaded by one of the hospital staff..

One of the health staff is seen in the video clip shouting on citizens to come to their rescue while fire department services are yet to show up.

The hospital published a release this morning dismissing the fire epidemic allegations.

The turn of an air-conditioning device at the doctors’ bathroom, according to the hospital’s PRO, was instead releasing smoke, but the situation was soon contained.

On November 30, 2020, was the last time a fire was recorded at the Korle Bu Teaching Hospital.

After the fire at the medical ICU, three patients diagnosed with COVID-19 who were on admission at the time were moved to the University of Ghana Medical Centre.

The ICU was gutted by fire in the early hours of Monday, November 30, 2020, as a result of an electrical failure in a ward socket.

At the time, Mustapha Salifu stated that all possible measures had been taken to evacuate all three patients in the ICU.

“Because the fire was spotted early, we were able to put it out as soon as it began. COVID-19 patients are in good health and under monitoring. “As a consequence of the epidemic, there were no casualties,” he said.

The following is the hospital’s comment about the recent fire scare:

At about 9 p.m. yesterday, an air-conditioner turn in one of the doctors’ bathrooms began releasing smoke, which was noticed by workers on duty.

Before the Ghana National Fire Service came, the on-duty personnel used fire extinguishers to rapidly put out the fire .

some of the babies were relocated to another wing of the same floor as a measure.

We would like to stress that there were no deaths or complications among the patients or personnel. normal activities have resumed after the Ghana National Fire Service concluded that there was no longer any risk to patients or workers.

We like to express our gratitude to the on-duty workers for their alertness and professionalism.