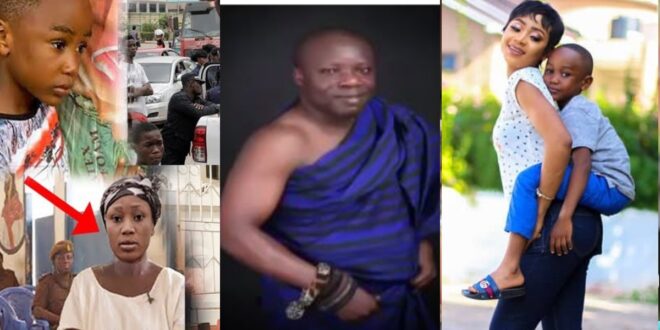 In a recent audio accessible to buzzgh, one of the chiefs in the Akwapim Traditional Area claims that Akuapem Poloo has not proved her heritage as an Akwapim. Nana Yirenkyi I, the Apesemakahene of Mampong Akwapim, was overheard on the phone saying that Akuapem Poloo has yet to assert her Akwapim ancestry. This was revealed by the leader during an exclusive radio interview with Nana Romeo of Accra FM.

Nana Yirenkyi I related how Akuapem Poloo came to see him once and claimed to be from the town, but she could not specify which part of Akwapim she was from.
The traditional ruler went on to state that he is yet to receive the name of the town and house where Poloo appears to have originated. He went on to say that once it was finished, it would be inappropriate for him or someone else to claim Akwapim as poloo’s hometown. Nana Yirenkyi I also said that he was also waiting for Poloo to come to him so that he could formally introduce her to the area’s leaders, but she had not done so.

The chief then warned the public against referring to Akuapem Poloo as an Akwapim. He went on to say that Akuapem Poloo might have declared to be an indigene of the region out of some kind of affection or connection, but it was not by birth. Pope Skinny, Praye, Bisa Kdei, Koo Ntakra, and KK Fosu were among the celebrities on his list who he said had proved they were from Akwapim.