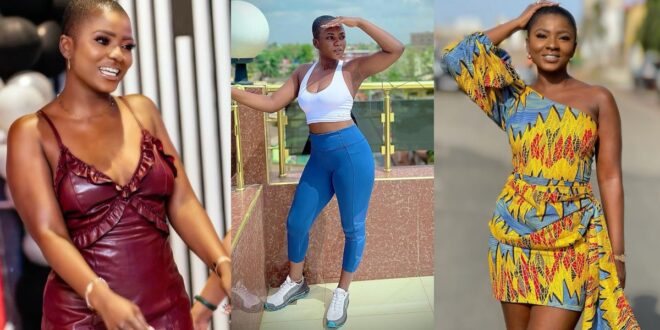 In a new post on social media, Ghanaian actress Priscilla Opoku Agyeman, also known as Ahuofe Patri, has given her many fans and followers something to look at.

The actress updated her Instagram profile with a new sparkling picture of herself striking a pretty pose in her workout clothes while in the gym, which was discovered by Buzzgh.com.

The actress was wearing a short blue-colored tank top, tights, and white shoes as she was photographed leaning on the glass door of the yet-to-be-named gym.

ALSO READ  Photos Of Kwabena Kwabena Smoking Drops: Suggests He Has Been Chopping And Sleeping With Ahuofe Patri - Video

As she leaned against a large mirror inside the gym, Ahuofe Patri was seen staring straight into the frame.

The actress wore her trademark low-cut hairstyle, which she has worn for quite some time.

Priscilla Opoku Agyemang captioned the picture of herself she posted on Instagram:

“New week. Let’s do this” and added some 3 emojis of biceps to it”