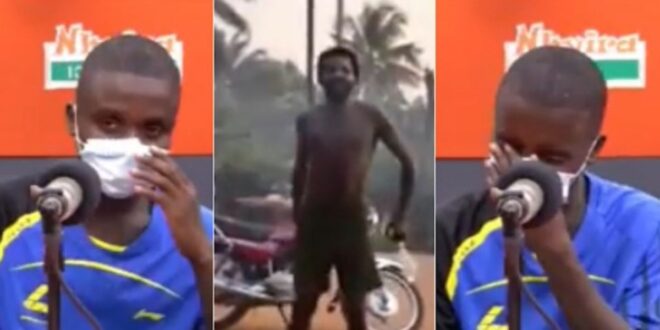 After using a 7 years old girl for Sacrifice, this footballer goes mad in Ghana.

Since he engaged himself in a cult activity involving the use of a seven-year-old child, a young Ghanaian man who plays for a division team has gone 90 percent insane.

According to a 25-year-old young man, while he is home, he sees frightening pictures, leading him to flee away much of the time. On Kumasi-based Nhyira FM, he revealed his story, while also disclosing that when he was in senior high school, he was first exposed to cultism.

Pressing on, he added that during his SHS days, he went to sought aid from a medicine man (mallam) which failed. It was after the loss that occultism was brought to him (saint as he called it).

He and three others went to a graveyard to sleep and it allowed him to achieve three goals in the inter-school rivalry during his school matches.

The meeting led him to deepen his confidence in the practice, and in their diverse cultures. The 25-year-old continued his story by claiming that galamsey (illegal mining) people came for moral backing had once consulted the saints on their behalf.

The spirit they had named ended up requesting a sacrifice from a seven-year-old child. He went to a neighboring village with his cult members, got a little girl, and used her as ordered.

Yet for a while, several of the things he did plagued him and made him act crazy in a way.

ALSO READ  Clemento Suarez Drops A Hilarious 'ABCD' Version Of Coronavirus: Its A Must Watch (Video)

His parents took him to the Wiase Mu Nsem show on Nhyira FM in search of a solution to his “madness.”