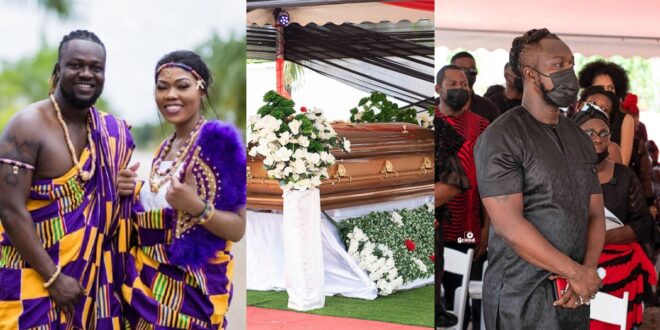 After the funeral of his wife, Eddie Nartey makes a bold statement and releases emotional images.

After his late wife, Vida Ohenewaa Nartey, was laid to rest, Ghanaian actor and film director Eddie Nartey talks and drops videos.
On Saturday, March 13, 2021, Vida Nartey was buried in a traditional burial ceremony in Accra, followed by her funeral rites.

Vida Nartey died in January 2021, a little more than two months after she married Eddie Nartey.

While the cause of her death is unclear to the general public, her death stunned the film industry after Eddie Nartey announced it on social media.

Many movie stars joined their comrade to bury his wife, as seen in photographs and videos from Vida’s funeral ceremony released by buzzgh.com.

Eddie Nartey has posted two photographs from his late wife’s funeral on his Instagram and other social media pages.

Eddie Nartey thanked his family, relatives, and sympathizers who helped him pay his respects to Vida Ohenewaa Nartey by sharing the images.

I want to thank God, family, friends and all sympathizers that came to support for the burial of my late wife. FAREWELL HABIBI