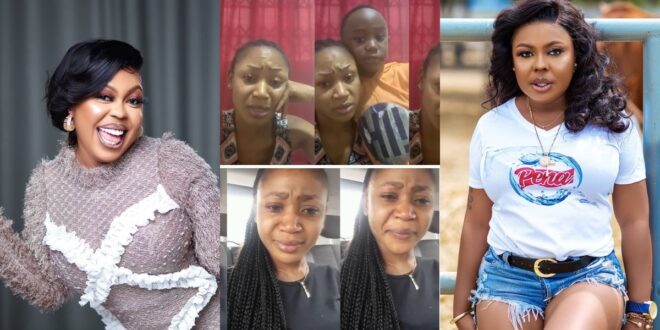 Child Rights International, according to Afia Schwar, was the mastermind behind Poloo’s prosecution and was using her as a scapegoat among all violent mothers.

The notorious and outspoken mother of three, who wants to be an ambassador for orphans in Ghana and a child rights activist, is having a field day with Poloo because she does not get along with her.

‘As an ambassador for Orphans in Ghana and a child right activist I say Ayeeko. Thank you for fighting for a child right from an abusive mother. I know illiterates n blockheads will not understand this or the cost involve Now to all abusive parents…children have their right n if we catch you abusing that right,the laws of the land will humble you. Looking forward to working with such a credible organisation…Congrats!!!! Good morning Ghana‘

Following their court trial yesterday, Akuapem Poloo was remanded by the court to undergo a pregnancy examination.

After her test, the court will make her final decision on Friday, April 16th, 2020.

Sarkodie, DKB, Vannessa Gyan, and others have pleaded with the court to be merciful with its final decision.