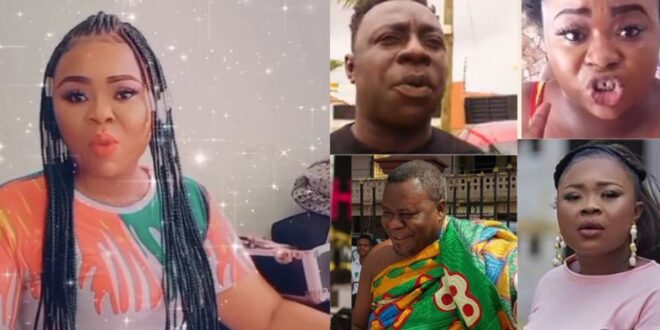 “Adu Safowaah is telling lies, Dr kwaku Oteng gave her over GHs7000 plus a Car for Adonko Advert”-Mr. Magic

Adu Safowaah tends to be a one-time favorite of Dr. Kwaku Oteng, CEO of Angel Group of Companies, has made several insane accusations against the businessman and millionaire.

She said she never got a dime from the businessman after filming the Adonko bitter advert, according to Adu Safowaah in an earlier report.

Her comments have made people ask questions regarding whether she is really telling the facts because her claims sound unusual.

Mr. Magic came out and exposed Adu Safowaah, who also happens to be the main character in the advertisement.

Adu Safowaah was originally not one of the people chosen to film the commercial, according to Mr. Magic, but she accompanied Sam Dackus, who happens to be the location’s advertisement producer.

He continued on and announced that they had got a request for them to reshoot the commercial for their rebranded bottle during the filming of the advertising.

They then went for a photo shoot and each of them was granted 1000 cedis by the guy and also added extra for hotel fees to Adu Sarfowaah.

When they decided to film another ad the next year, they all received 5,000 Cedis from Dr. Kwaku Oteng.

Moreover, the main character in the commercial went on and announced that both of them received a car from Kweku Oteng only for the advertising.

Narrating how they all got the vehicle, he revealed that they were welcomed to his house by the CEO and thanked them for the Adonko brand’s growth.

At that point, he told them to go to his garage and pick any vehicle of their choosing.

Although he went for a Camry, Adu Safowaah selected a Toyota Corolla.