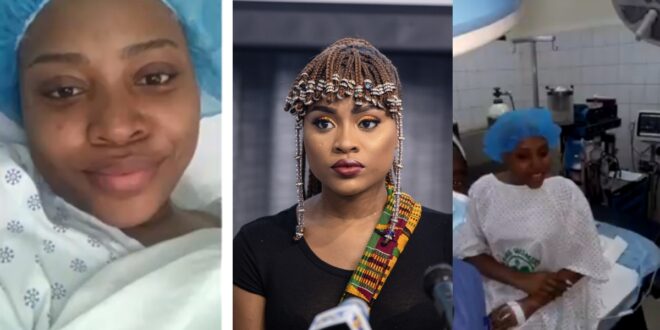 Recall that on March 4th, 2021, award-winning Ghanaian singer Adina Thembi posted a video on Instagram announcing the removal of a fibroid from her body.

She expressed herself as follows:

“Exactly two weeks ago today I checked into Tema Women’s Hospital to undergo surgery to have Fibroids removed.

A HUGE thanks to the surgeons, doctors and hospital staff for making the process more relaxed than I thought it would be! Grateful for a successful procedure and an ongoing smooth road to recovery. Happy to be able to share my story. 🙏🏾”

Fans and well-wishers wished her a quick recovery in response to her tweet.

For the first time, the ‘Take Care of You’ singer has revealed how she learned she had a fibroid and how she had it surgically removed.

Adina said she learned she had a fibroid in 2020 in an interview with Kwame Insaido of Uniiq FM 95.7’s Mid Affairs Show.

ALSO READ  commercial sex workers in Kumasi cry over lack of customers due to coronavirus.

“I found out late last year”, she said.

She admitted that no matter how much she worked to hold her tummy flat, it grew bigger.

She wanted to go to the doctor for a check-up because she was concerned about the situation and was informed that she has a “massive fibroid.”

“I went to a different hospital to do another scan and they also confirmed it. And that explains everything cos I’ve been trying to shake this stomach and it has not been going”, she added.

Adina said she made the decision to have surgery right there and there.

The singer also announced that her sister had the same issue and that she was present to help her endure the operation in 2017, so it was simple for her to summon the confidence to get hers extracted as well.

Kwame Insaido questioned whether she was scared of the operation, to which she replied that she had been through stages of counseling, which made her less anxious.

Adina said that she chose to share her story openly because she wished to inspire people by increasing consciousness about it.