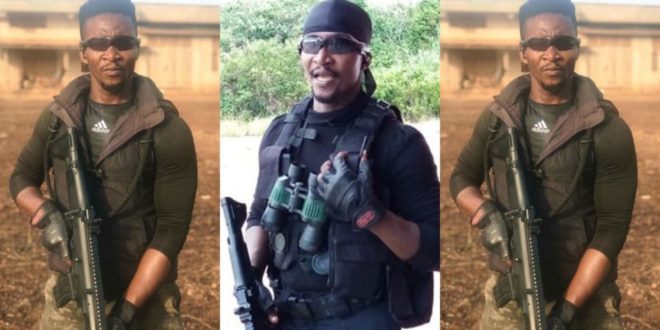 Kumawood actor popularly known as Scorpion, in about two months ago, was attacked by unknown gunmen at his home in Kumasi which led him to sustain second and third-degree injuries and being hospitalized at the Okomfo Anokye hospital.

Following reports on his attack, it also came out that he had succumbed to his wounds – but such rumors were later trashed by his family who revealed he was doing well responding to treatments.

Also, his family later suggested that they believe the attackers were contracted to take the actor’s life. According to them, the actor and other tenants in the house have confirmed the armed men repeatedly said he was their target.

Now the good news is, Scorpion who is noted in movies for his outstanding stunts has been discharged from the hospital and leaving his life to the fullest, and fans are released to find him doing well at long last.

The actor has given a full account of his encounter and ordeal with the attacker as he has been interview by his colleague actor Kwaku Manu on his Aggresive show.

He revealed the on the night of the attack, he was asleep and around 2 am at dawn, he heard some people knocking at his door – pushing it with all effort to break into his house. According to Scorpion, he and his wife had to rush to hold firmly to the door.

The actor said, “They were firing guns and was saying, they came because of me, They proposed a challenge on my Karat prowess”. He decided to step out and face them with “vim” because they might enter the room to hurt his children.

“I moved out with pressure immediately, when I got outside, they shot me. But Still fought them, we struggled for about 10 minutes, the way I grabbed them, I could have easily killed them but my soul was telling me not to do so.” Scorpion said.

He would later rush to his friend’s house with blood all over him and the friend would later take him to Okomfo Anokye teaching hospital. According to Scorpion, he has no issues with anyone so he doesn’t understand why they really attacked him.