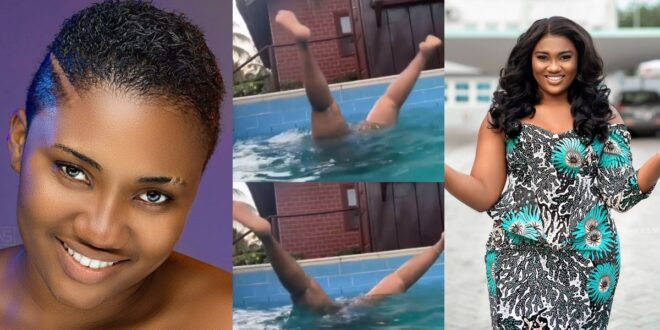 Abena Korkor gives a free show, opens her legs wide in a pool for fans to enjoy – Video

Abena Korkor demonstrates her remarkable athleticism for a woman with a pus-sized body in the new footage.

The former TV3 host is seen in a bikini and enjoying fun in a swimming pool in a video obtained by Buzzgh.com.

Abena Korkor seems to have the bottom half of her body (waist to knees) with her legs wide open at first glance. She closed her legs and lowered them seconds later when she jumped out of the pool, her face lit up with delight as she said, “I did it!”

It was at that point when one realizes Abena Korkor was’standing’ underwater on her head when doing a split with her legs up in the air.

Abena Korkor, who shared the video on her Facebook page, said she attempted the acrobatic maneuver over a hundred times before succeeding.