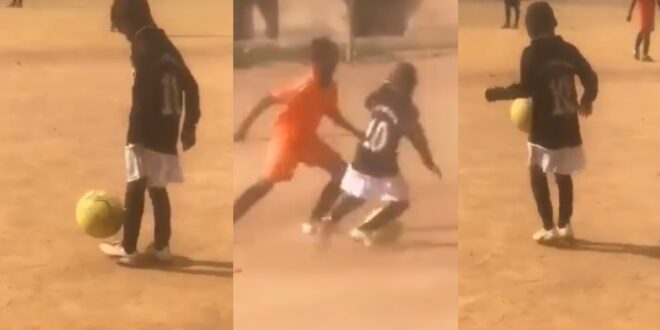 A 10-year-old Ghanaian player receives interest from a European club after a viral video of him demonstrating his football skills goes viral.

A viral video showcasing the potential of a Ghanaian 10-year-old football star has helped him break through in the league.
Saddick Adams, a sports columnist, was the first to break the story on Twitter.

According to him, a video of a 10-year-old boy, whose name and other specifics are yet to be released, trended online during a training session with peers.

In reality, the boy demonstrated huge football skills by dribbling his opponents in the video monitored by buzzgh.com.

In the brief training tape, the opponents of the young footballer committed misconducts (fouls) that were judged unjust by the referee.

A European club is pursuing the young boy as a result of his excellent results in this viral video, according to Saddick Adams, a sports journalist. If successful, this will be his breakthrough.

Saddick Adams, a sports writer, said in the video that no one should take anything for granted.

Don’t take anything for granted. This 10year old Ghanaian gem is getting his breakthrough in football via this video that’s gone viral. An European club has shown interest.. Will come with more on him later.

Here is a link to a video that has gone viral: