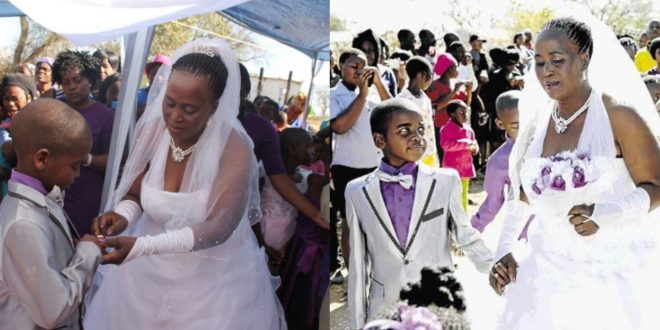 About six years ago somewhere in June 2014, two couples made headlines in the various news portals internationally as a 9-year-old boy, Saneie Masilela was set to marry a 62-year-old woman Helen Shabangu in South Africa.

according to reports that came out, Saneie Masilela tied the knot with Helen Shabangu, who is already married and a mother-of-5 because his dead ancestor told him to.

The family of the 9-year-old boy paid £500 for the bride and a further £1,000 for the huge wedding day, which was organized in just two months.

The young groom said he still hoped he would have a proper wedding to a woman his age when he gets older.

ALSO READ  "I am still single because no man can handle my a$$"- Lady with huge backside reveals.

“I told my mother that I wanted to get married because I did want to. I’m happy that I married Helen – but I will go to school and study hard. When I’m older I will marry a lady my age.” said the boy

according to the boy’s mother, her son and the 62-year-old woman don’t leave together as couples after their marriage and the two have agreed that the marriage was just a ritual to make their ancestors happy and as such the boy will marry another when he grows up.

see pictures from their wedding: