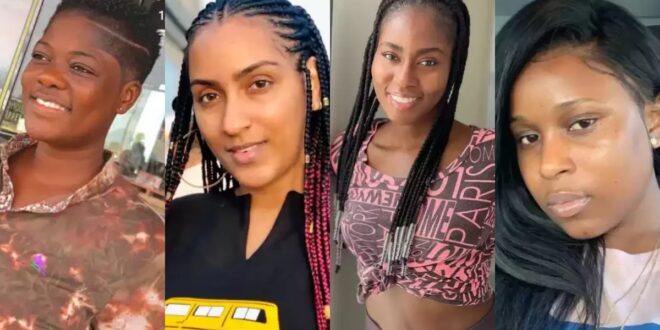 They claim that beauty resides in the beholder’s eyes and that natural beauty is uncommon. Here are pictures of the top 7 female celebrities from Ghana who even look fine without makeup.

1. Juliet Ibrahim, of Lebanese, Ghanaian and Liberian descent, is a Ghanaian star, film maker and artist. For her performance in 4 Play, at the 2010 Ghana Movie Awards, she received the Best Actress in a Leading Role Award. According to A-listers Publication, she has been referred to as the’ Most Stunning West African Lady.’

2.Berla Mundi Berlinda Addardey is a Ghanaian television personality, female advocate and voice artist, popularly identified as Berla Mundi.  Born: The 1st of April, 1988.
After becoming the second runner up at the 2010 Miss Maliaka beauty pageant, she started her media career.

ALSO READ  SAD! 3-Year-Old Girl Who Was Stabbed With His Pregnant Mother By Armed Robbers Dies In Kumasi - Photos

3.  Salma Mumuni
Salma Mumin is an entertainer from Ghana. Her services to the Ghanaian film industry have won her few distinctions, including the 2014 Papyrus Magazine Screen Actors Awards for Best Foreign New Actress and 2019 Ghana for Best Actress in a Leading Role. She’s already an influencer, an entrepreneur and a filmmaker. She’s got only 1. 7 million fans on her account on Instagram.

4. Yaa  Jackson
Maame Yaa Konadu Jackson(born October 18, 2000) is an actress and singer from Kumawood, Ghana, who started acting at the age of 2. Yaa is the daughter of famous film producer Jackson K Bentum of Kumawood.

5. Makafui fella
Fella Precious Makafui is a philanthropist and a Ghanaian actress. Mostly, she is renowned for her work in Yolo. She is married to Medikal, a singer and rapper.

ALSO READ  Fella Makafui reacts for the first time since Medikal disclosed that he will marry her.

7 Asantewaa
She is now one of Ghana’s stunning and fashionable TikTok Stars. She has captured many Ghanaian hearts with her distinctive look.